Everyone In The World Is Hypnotised

How much control of your life do you have? Ninety percent? Fifty percent?

This means 90% of your life is on autopilot.

hypnosis | hɪpˈnəʊsɪs |
The induction of a state of consciousness in which a person apparently loses the power of voluntary action and is highly responsive to suggestion or direction.

By this definition, everyone is always in a state of hypnosis.

Who Is The Real Boss?

You’re not in control of your blood pressure and your heartbeat. Don’t think of a pink furry cat! Try as you might but you fail.

Whether you sense it or not, the environment and people around you wield great influence on your mind and body. As an example, your mother-in-law somehow manages to push your buttons every time. When she’s around, your blood pressure automatically increase and your heart palpitates. Using willpower, you keep your cool but you blow your top in the end.

Does this sound familiar?

What controls your life then? It’s your unconscious mind! In your life, it’s in the driver’s seat for the most part. Curiously, it is actually a good thing. The seat of your unconscious mind / kirasolly from Adobe Stock

Imagine you’re on an enjoyable forest trek when an enormous spider weaving its web appears 10cm from your face. Your reflexes kick into high gear. You stop in your tracks, arch your back, grab a tree branch, hold your breath, balance yourself and shut your eyes. Thank your unconscious mind because it saved your day. The spider is relieved that its web is intact.

The unconscious mind can easily manage a million events without breaking a sweat, whereas your conscious mind juggles a whopping 1 to 3 events. Willpower stands no chance against your reflexes!

The unconscious mind is the workhorse that manages 90% of the body’s chores from pumping blood to dodging spiders. Over the years, it has memorised what it takes to survive in this challenging physical world. It is your friend.

However, the unconscious mind is unable to discern between good and bad. It absorbs information verbatim. If your dad yelled whenever he was angry during your childhood, you unconsciously learn it and behave similarly as an adult. The unconscious mind can be your enemy too.

You can see that it can be both your friend and your foe.

The Mistake That Cured A Lethal Disease

Hypnosis is the technology to interface with the powerful unconscious mind, coaxing it to do your bidding. This excerpt from The Biology of Belief illustrates the power of hypnosis.

In 1952 a young British physician made a mistake. It was a mistake that was to bring short-lived scientific glory to Dr. Albert Mason. Mason tried to treat a fifteen-year-old boy’s warts using hypnosis. Mason and other doctors had successfully used hypnosis to get rid of warts, but this was an especially tough case. The boy’s leathery skin looked more like an elephant’s hide than a human’s, except for his chest, which had normal skin. 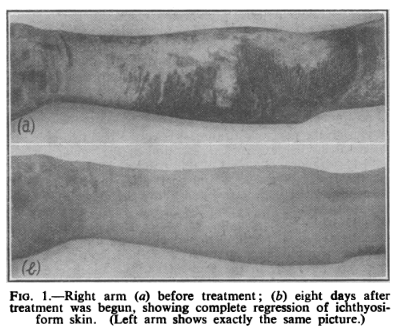 Mason’s first hypnosis session focused on one arm. When the boy was in a hypnotic trance, Mason told him that the skin on that arm would heal and turn into healthy, pink skin. When the boy came back a week later, Mason was gratified to see that the arm looked healthy. But when Mason brought the boy to the referring surgeon, who had unsuccessfully tried to help the boy with skin grafts, he learned that he had made a medical error. The surgeon’s eyes were wide with astonishment when he saw the boy’s arm. It was then that he told Mason that the boy was suffering, not from warts, but from a lethal genetic disease called congenital ichthyosis. By reversing the symptoms using “only” the power of the mind, Mason and the boy had accomplished what had until that time been considered impossible. Mason continued the hypnosis sessions, with the stunning result that most of the boy’s skin came to look like the healthy, pink arm after the first hypnosis session. The boy, who had been mercilessly teased in school because of his grotesque-looking skin, went on to lead a normal life.

Remember how your naggy mother-in-law pushes your buttons? Lashing out somewhat works on her but it’s catastrophic on your boss. You learn the hard way that it strains relationships but try as you might, you cannot shake it off. The powerful and hypnotised unconscious mind yanks you back to the hamster treadmill where you keep looping over and over again.

Feeling frustrated, you want this behaviour gone but you don’t know how to begin! Hypnotherapy opens a communication channel to your unconscious mind by putting you in a light trance. During the session, you rediscover that your strict dad constantly nagged at you as a child. One day you lashed out and to your surprise, he stops nagging. Unconsciously your mind registers that lashing out shuts up naggy people. By reframing the incident, your lashing out behaviour is resolved and substituted with positive suggestions.

Finally you break free from the chains of your past! You emerge more mindful, more aware. Hypnotherapy has dehypnotised you.

Are you ready to resolve old drama with hypnotherapy? Come and surprise yourself!

How Reiki Can Transform Your Life Previous

Trauma Shaped Our Beliefs, Including Yours Next